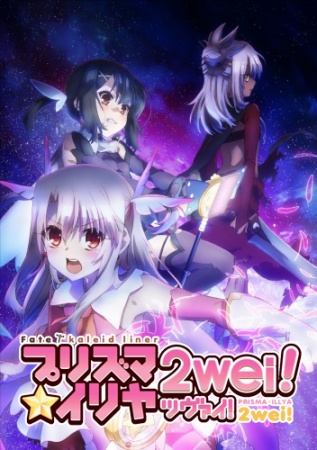 Note: This review was written 1:st February, 2015. (Original) This is my first public anime review. This version is edited slightly.

Genesis. This will be my first of upcoming reviews heavily inspired by various wonderful people who reviews anime shows as well. Some of them active in Reddit, like /u/banjothebear (Yuri Bear cough) who has helped me enormously and is one of the people who has inspired me to start doing this, and others whom are lurking and posting in the MAL corner. This is my first (voluntarily) review that I have written, and my first for anime. With that in mind I would like you to invite to a discussion of the show in matter and if you would like, you may freely critique my review and/or writing.

This review is written with the assumption that you have seen the prequel, Fate/kaleid liner Prisma☆Illya.

Sense of place. The term can be used in many different ways. For some it may be unique places like ones bedroom, for others it may be about an attachment to a group of people where one feels safe and free to express oneself. We all seek a place to belong, somewhere where warmth emits. Some are lucky to find attachment early during their childhood while others struggle to. When you do not find a place, you feel left outside, alone, scared, cold and that is when one is the weakest and perhaps most aggressive; acting with hostility towards those who have taken your comfortable place out of frustration and fear.

2wei! is a story about finding a place to belong.

The sequel to Fate/kaleid liner Prisma☆Illya, Fate/kaleid liner Prisma☆Illya 2wei! continues the journey of the two girls, Illyasviel and Miyu. After completing the task of collecting the class cards, Illya and Miyu adjusts to live their life normally after the events. But that does not last long since there is trouble brewing in the complex space. Illya and Miyu are once again needed by Rin and Luvia to deal with the side effects left by the cards. Following the restoration we are introduced to Kuro, the new addition of the story.

Being reminded that others have a normal life does take a toll on one’s self-confidence and balance, and this is what happens to Kuro. With Illya being surrounded by friends and family, Kuro is constantly reminded of what she lacks. When Illya says that she wants her life to return to normal it triggers Kuro making her loathe Illya all the more. Even though surrounded with demoralizing scenes she tries to find a place by taking advantage of Illya’s desires (which Illya is not able to act on because of fear) and attempts to push her out and replace her. This is shown when she advances towards Shirou (who Illya holds a dear crush for) and being sexually suggestive while flirting with him. Her attempts on phasing Illya out eventually ends with a fight and it being interrupted with perfect timing (a bit too appropriately) by a third-party, the source of Kuro’s problem itself. As the show progresses the influence of Illya’s continuous friendly advances leads to Kuro being able to find a place in her former enemy’s warmth. Although minor, Miyu plays a role in the story when Kuro challenges the validity of her friendship with Illya which Miyu responds with a strong resolve, and it shows that Miyu has developed during the course of the series.

The themes of friendship and trust that was dealt with in the previous season are now shifted away to give way to the new theme, a place of belonging. Early on the show loses focus on the themes it attempts to deal with. Episodes leading up to the climax favors comedic events spawned from Kuro’s interactions and these events take too much time of the shows constricting episode count. Episode 4 being the biggest offender with it being about a game of dodgeball which is dragged out to the point that would make a taffy confectioner jealous. The dodgeball game serves little purpose in the narrative with its intentions being about eliciting chuckles and to mystify Miyu and the school nurse, perhaps hinting the upcoming events of the series.

The theme is vaguely hinted throughout the story from Kuro’s hostile and apathetic actions towards others, and her reaction from Illya’s questioning about her reason to remove Illya out of the way. It is later clarified why Kuro acted the way she did, but it does not leave a satisfying conclusion. There is a sharp contrast with how light and playful the story was compared to the event leading up to the climax, and the bridge leading up to it gives little time to empathize with Kuro. With these reasons the climax did not reach its full potential and in the end falls flat.

Although humor is a part of the series, anything but the interactions between the main characters are so weak that they detract time only to attempt a flat and dull gag. It also feels artificial and forced. The shows side characters are significantly degrading ones experience, to the extent that you cannot enjoy the show whenever they pop-up. Tatsuko being the energetic and feisty troublemaker, Suzuhana the mature one, Nanaki the one who just goes along with anything and Mimi the one with lacking presence. They are all simplified, fitting common tropes and serve to share the burden of the main cast to supply amusement. This shows a lack of trust given to the main characters ability to elicit laughter. The memorable and great moments of fun are risen naturally from the main characters interactions.

One side character to note is Shirou, that lacks any purpose in the story other than to make the main characters, as well as Rin and Luvia, lose control and behave out of character. Two notable scenes are when Miyu clings to Shirou like a vulnerable puppy and scuttles away, and Rin and Luvia trying their best to look impress and get his attention. It feels out of place and is one of the downsides with the show. The influence he has on the girls and their feelings for him feels out of place whenever they are in the same scene. We are never explained why the girls feel the way they do towards him, and it does not have any impact at all. It just gives rise to an awkward and confusing scene. It also gives a sense of a subplot being that the girls are a part of a harem RomCom with Shirou being the typical dull and oblivious main character.

Although flawed, the series is enjoyable to a certain degree. The interactions between the characters does spawn great moments of comedy; in particular, the way Illya reacted and her face when she was seen by her classmates in her magical girl outfit is one the funniest parts of the show. The scene in episode 2 where Kuro explores the mysteries of Miyu’s mouth might be weird to watch, but it sure offers a kind of fan service that is tasteful without detracting the characters to simple sexual objects. How the camera angles during that scene showing Illya in the background with the two girls kissing in the forefront and the fact that the camera lingers shortly close to them and quickly backs away to give them space gives the idea of the camera respecting their moment. The way Illya observed them during that scene reflects perfectly how I reacted to it, and it shows that the producer knows its audience and what reaction they expect. Interestingly enough there is a reason behind Kuro’s kissing, however it is not convincing enough to pass it off since there are other ways she can recharge her mana which does not require her to force herself onto other girls.

It is also a pleasure to see how Kuro slowly warms up to the rest of the cast as the show goes on. The antagonist that is introduced later in the second half ramps up the girls relationship. The battle that follows shows how well the CGI complements the action that is displayed. The animation of the characters are well done and smooth, and it does not detract the exhilarating action. In contrast to the light and bright scenes in the first half of the show, the dark arc in the end fits well since it serves to strengthen the girls bond by inserting a common enemy which they will have to work as a team in order to defeat it. This allows the girls develop their characters even further, and gives Miyu, Rin and Luvia some needed screen time.

Illya’s character design has never looked this good before, making other works design of her look poor in comparison. Miyu and Kuro are no exception to the lovely design as well. Silver Link’s strength regarding animation are character design and CGI, and they sure do know how to draw characters with a great consistency. The shows CGI looks amazing with its natural presence unlike other shows which feature CGI that looks out of place. The lighting applied to the scene are nicely represented, and the shadows covers and wraps around the objects and characters they are on decently giving a decent overall look. Other than the CGI, the overall animation quality is decent The soundtrack and background music does not impress. It does its job, but being simple regarding synths and tunes, as well as the background music during the fight scenes feeling more like a dance than action pumping sound it leaves one unfulfilled. There are not any notable or memorable soundtracks. At least the ending song is nice, fitting well into the shows light and magical feel with its instruments sounding very light and giving a cheery and girly overall sense.

Cute girls in cute outfits is what Prisma☆Illya is all about. With a heavy sprinkle of magic, friendship and acceptance it paints itself like any other generic Mahou Shoujo but within the Fate universe. Although the show handles itself decently at some aspects its dynamic between philosophy and humor falters, and it offers nothing new and should be treated as nothing more but sugar. For the fans of Illya, I suggest hopping onto this series since Illya has never before been more beautiful and cute. She looks lovely but the shows she stars in are anything but.

View all posts by Rebu